Jack Lenz is producing a feature film about the life of Mona Mahmudnizhad and her family. Mona was arrested at the age of sixteen for teaching children who had been expelled from school because of their religious beliefs. Mona and nine other Baha’i women were then executed after refusing to deny their religion and become Muslims. 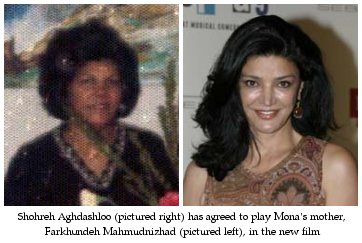 The latest news relating to the production can be found on the Mona’s Dream website. They are currently at the casting stage and Shohreh Aghdashloo, who starred in House of Sand and Fog and 24 (Day 4) has agreed to play Mona’s mother, Farkhundeh Mahmudnizhad.The web site includes short profiles of each of the ten women martyrs of Shiraz, including Mona and Shirin (my wife Ladan’s aunt) and includes several beautiful pieces of music written about their and Mona’s sacrifice. You can also view Doug Cameron’s video of “Mona and the Children” on the site.

Links:
Mona’s Dream
Hanged for Teaching “Sunday School”
A Dress for Mona
Persecution of the Baha’is in Iran

A song by Tear Down Those Borders dedicated to Shirin Dalvand, executed by the Iranian authorities on 18th June 1983 for being a Baha'i.