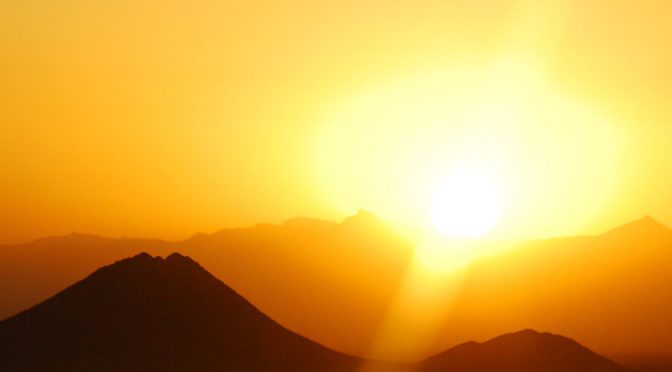 While the Badí’ calendar may qualify as the first complete calendar to be Revealed by the Prophet-Founder of a religion,  even the earliest calendars have been associated with the religious traditions of the world’s populations. Throughout the world, early religious practices had a God, or Goddess,  in common, an entity whose physical appearance is still recognised for bringing everyday light and warmth to the world, and that ancient God is, of course, the Sun.

Civilisations soon realised that the sun, with its associated light and warmth, followed a regular pattern, and understanding that pattern was essential to optimising agriculture.

Planting seeds on a few uncharacteristically warm days of winter could result in a destroyed crop. Aside from the right temperature conditions, plants also need enough light to grow properly, and so it was useful for people to know when the days were getting longer than the nights and vice versa. Humankind started digging trenches and erecting rocks that would align with the sun to tell us when the days would start to be longer than the nights and/or when the longest or shortest days of the year were. The two days of the year on which the day and the night are of equal length are each called an equinox, combining the latin for “equal” and “night”.

The annual vernal equinox became the focal point of many calendars, even when the start of the year was not somehow based on this event it was still used to check the alignment of calendars with the sun or the seasons.

Unlike in Roman times when the origins of our Gregorian calendar were born, by the 19th century, when the Báb revealed the main details of the Badí’ calendar, astronomy was advanced enough to accurately predict the timing of the equinox into the future. The historical focal point of calendar systems was no longer required to check alignment, the accuracy with which it could be predicted meant that it was now possible for us to use the equinox as an exact starting point for the year, and to plan well into the future on that basis.

The Báb revealed that the first month of the Badí’ calendar “hath been named by the Lord the month of Bahá’ in this sense, that the
brightness of all the months is in that month. And [God] hath set it apart for ‘Him Whom God shall make manifest’… And the first day [thereof], which is the Naw-Rúz, is the day of ‘there is no god but God’; the like of that day is as the ‘Point’… from which all are created, and unto which all return”.

In the Badí’ calendar, the equinox – which is the basis for Naw-Rúz, the Bahá’í new year – has become the focal point of the year, with spiritual significance as well as physical. ‘Abdu’l-Bahá is recorded as saying, in a talk on the day of Naw-Rúz, that:

“From time immemorial this day has been consecrated for in this there is a symbol.
“At this moment the sun appears at the meridian and the day and night are equal. Until today the North Pole has been in darkness. Today the sun appears on the horizon of the North Pole. Today the sun rises and sets at the equator and the two hemispheres are equally illumined. This sacred day, when the sun illumines equally the whole earth, is called the equinox, and the equinox is the symbol of the Manifestation of God. The Sun of Truth rises on the horizon of Divine Mercy and sends forth its rays. This day is consecrated to commemorate it. It is the beginning of spring. When the sun appears at the equinox, it causes a movement in all living things. The mineral world is set in motion, plants begin to shoot, the desert is changed into a prairie, trees bud and every living thing responds, including the bodies of animals and men.
“The rising of the sun at the equinox is the symbol of life, and likewise it is the symbol of the Divine Manifestations of God, for the rising of the Sun of Truth in the Heaven of Divine Bounty established the signal of Life for the world. The human reality begins to live, our thoughts are transformed and our intelligence is quickened. The Sun of Truth bestows Eternal Life, just as the solar sun is the cause of terrestrial life.”

Bahá’u’lláh has written in relation to Naw-Rúz:

“Praise be to Thee, O my God, that Thou hast ordained this day as a festival unto the favoured among Thy servants and the sincere among Thy loved ones. Thou hast called this day by that Name whereby all created things have been subdued and the breezes of Thy Revelation have been wafted between earth and heaven, a Name through which all that hath been recorded in Thy Holy Books and Sacred Scriptures hath been made manifest, and which Thy Messengers and Thy Chosen Ones have foretold, that all men might be made ready to behold Thee, to turn towards the ocean of Thy reunion, to stand before the seat of Thy throne, and to hear Thy wondrous call from the Dayspring of Thine invisible Self and the Dawning-Place of Thine Essence.”

FIXING THE TIME OF THE EQUINOX

There is an exact moment at which the sun’s position relative to the Earth crosses the equator, but you cannot start a year at an exact moment in time, the year has to start on a day, and so the Bahá’í year starts on the day on which the vernal equinox takes place, but there is still a problem with this, one known to the Báb who revealed the calendar and Bahá’u’lláh who adopted the calendar, and that is that the day on which any event occurs varies according to the time zone you are in. Americans will be very familiar with this as they often see timings given in two or three time zones for broadcasts, with three hours difference from coast to coast. Around the planet there are 25 hours of difference (time zones overlap in the Pacific Ocean) and so it is possible that the equinox could fall on three separate days at different locations on the planet, so it was left for a future authoritative decision to be made as to which place on Earth would be used to determine the time of the Vernal equinox.

Shoghi Effendi, as The Guardian of the Bahá’í Faith, explicitly left this decision to be made by the Universal House of Justice once established, meanwhile allowing Iranian Bahá’ís to celebrate Naw-Rúz at the equinox according to local time (the Iranian new year is on this day and – aside from the Badí’ calendar – their calendar is the most accurately aligned to the equinox through their leap year system), and the rest of the world were instructed to use March 21st, as previously adopted by the Christian church, as the approximation of the date of the vernal equinox in the northern hemisphere.

However, in the notes from her pilgrimage in 1937, Mary Sutherland Maxwell (unofficially) recorded Shoghi Effendi as saying that “Our Greenwich time is Tihran, when the equinox occurs in Tihran will be the criterion for the whole Bahá’í world.” So it seems somebody had some foresight of what the Universal House of Justice might decide.

On 10th July, 2014, the Universal House of Justice wrote a letter to the Bahá’ís of the World implementing several changes that had been left for them to introduce, among them was this announcement:

“We have decided that Tihrán, the birthplace of the Abhá Beauty, will be the spot on the earth that will serve as the standard for determining, by means of astronomical computations from reliable sources, the moment of the vernal equinox in the northern hemisphere and thereby the day of Naw-Rúz for the Bahá’í world.”

And so it was that the birth of the new year and “the symbol of the Divine Manifestations of God” became physically associated with the birthplace of the Manifestation of God for this time, Bahá’u’lláh.

As the Bahá’í day starts at sunset (there is perhaps another blog post in that) the last sunset in Tehran before the vernal equinox marks the start of the first day of the year, and the festival of Naw-Rúz likewise begins with that sunset. Whichever day that festival falls upon in Tehran is the first day of the year worldwide, even if the equinox falls on a following, or previous, day locally.

Because Naw-Rúz is fixed to the vernal equinox and other calendars use a system to approximately align to the equinox, the Bahá’í dates do not line up exactly to the dates of other calendars and the Universal House of Justice publish tables with the Gregorian date of Naw-Rúz many decades in advance.

On the Bahá’í calendar, the renewal associated with Naw-Rúz, as well as its festivities, start immediately after the fasting period. For 19 days, Bahá’ís have abstained from food and drink between sunrise and sunset (this is a simplified description of the law) and so the festival is in particularly strong contrast to this.

In a Tablet revealed for Naw-Rúz, Bahá’u’lláh wrote:

“Praised be Thou, O my God, that Thou hast ordained Naw-Rúz as a festival unto those who have observed the Fast for love of Thee and abstained from all that is abhorrent unto Thee. Grant, O my Lord, that the fire of Thy love and the heat produced by the Fast enjoined by Thee may inflame them in Thy Cause, and make them to be occupied with Thy praise and with remembrance of Thee.”