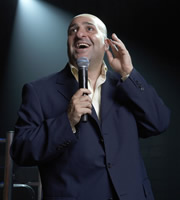 The Omid Djalili show starts a six week run on the BBC tonight, having survived the criticism that it may make light of serious subjects such as terrorism with, for example, a sketch called Suicide Bomber School. I am personally a firm believer that comedy can subtly eat away extremist and erroneous views by magnifying them beyond the point at which we identify those views as being our own, but there is always a line below which such comedy will be seen as tasteless and that line is not easily defined. The BBC may, therefore, appear brave to give Omid a Saturday night slot on their flagship channel, but Omid has been staying on the right side of that line in his stand-up routines since he started touching on such material, following the 9/11 bombings, in 2001.

Omid is a serious actor as well as a stand up comedian, his own web site includes a show reel of some of his more serious roles. Perhaps Omid would rather be known as an actor than a comedian but he has always had a natural ability to entertain, my earliest memories of him are from a Baha’i youth conference in London in the mid 1980’s where he performed some sketches with the help of Inder Manocha, now also doing stand-up routines. My brother and I did some break dancing at the same event.

That conference was before Omid took on stand-up comedy professionally and so his material has matured a lot since then, but as a long standing fan and admirer of Omid’s talent and radiant joyousness, I am very familiar with most of Omid’s stand-up routine, some of which is to be repeated yet again for this tv series. Hopefully a prime time BBC ONE airing for this material will be a last stand for some of the older routines and more newer jokes will be developed. The old jokes are still funny to watch, but I don’t need to see them performed because I have seen them so many times that they are imprinted in my mind. That said, I do have a desire to see his “Indian bingo caller” resurface, though I doubt that will make it into this show.

The Omid Djalili show starts tonight at 9:30 on BBC ONE and runs for six weeks.

Omid Djalili presents a programme on BBC Radio 4 looking at comedy in Iran. You will be able to hear it on their website for a few more days.

The documentary lasts about thirty minutes and has many clips from Iranian comedians.

Inder Manocha has a supporting role in an adaptartion of Meera Syal’s book “Life isn’t all Ha Ha Hee Hee”.

Inder, who recently won an EMMA for best comedian and is regularly touring with his highly rated comedy act, will star alongside Laila Rouass, Ayesha Dharker, Meera Syal, Sanjeev Bhaskar and Ace Bhatti as well as the other supporting cast of Lalita Ahmed, Indira Joshi and Rani Singh.

Filming is currently underway and the three part drama should air in the spring.