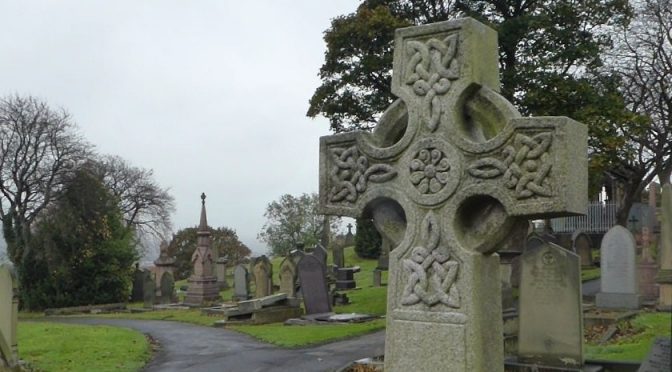 Newcastle upon Tyne shares a special connection with many of the celebrations of the bicentenary of the birth of Bahá’u’lláh that have recently been taking place around the world.

In the summer of 1886 a talented 24-year-old Cambridge natural sciences graduate, with an interest in oriental and middle-eastern affairs, and a flair for languages, and who was still also completing studies in medicine, was reading an 1866 publication in which its author, Arthur de Gobineau, provided eye-witness accounts of the gruesome persecutions faced by the followers of the Báb (the Prophet forerunner of Bahá’u’lláh) in Persia.

Edward Granville Browne, born 7th February 1862, was the son of a prominent Newcastle upon Tyne businessman who also served as mayor of the same city for two years. Not interested in working for his father’s engineering and shipbuilding firm, he studied medicine at Cambridge University where he developed a particular interest in Persia. On reading Gobineau’s record of the attacks on the Bábís of that country he was particularly struck by the spirit with which the Báb’s followers had met their persecution, and consequently drawn toward the Báb.

He travelled to Persia for a year in September 1887 and recorded his experiences in the book “A Year Amongst the Persians”.  Upon his return he took up a post as Cambridge University’s first lecturer in Persian, furthering, as a fellow at that university, his interest in the literature, science, politics and religion of Persia, and publishing many books and papers on these topics.

“Although this Wronged One had not consorted for many years past with people from foreign lands, We received him on several occasions. Portents of sincerity could be discerned on his visage. We beseech God to aid him in such undertakings which would be conducive to the effacement of mischief and the promotion of the betterment of the world. He is the Hearing, the Prayer-Answering.”

It was just after this visit that Professor Browne received the Persian manuscript of A Traveller’s Narrative, authored by ‘Abdu’l-Bahá, which he translated into English. Initially criticised for his fascination with the Báb and his followers, it was later recognised – as the Bahá’í Faith started to become better known in the West – that Professor Browne had possibly studied and recorded the birth of a major new world religion,

In 1906 Professor Browne found a very devoted and supportive wife in Alice Blackburne-Daniell, with whom he raised two sons, Michael and Patrick. He was known for his kindness, generosity and hospitality. In 1924 he was struck by a severe heart-attack, after which Alice nursed him until her death on June 28th 1925, an event which left E. G. Browne extremely grief-stricken. He joined her just six months later, dying from pneumonia on January 5th, 1926. They are buried together in Newcastle’s Elswick cemetery. 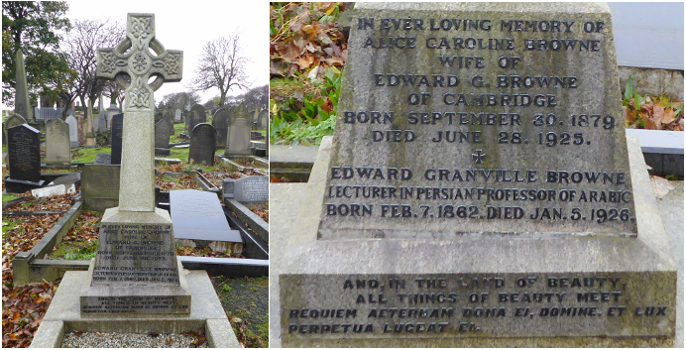 Although Edward Granville Browne had been very impressed with the Bahá’ís he had met on his travels, his interests also led him to spend a lot of time with Mirza Yahya and his small number of followers who – unlike most Babís – did not accept Bahá’u’lláh as the successor Whom the Báb had referred to as “Him Whom God shall make manifest” and, for a period, E. G. Browne’s publications about Bábíism were aligned with this perspective. It is worth saying that all of Professor Browne’s enquiries into the Bábí and Bahá’í religions were most probably from the perspective of a passionate academic interest rather than from a personal search after religious truth. After hearing an explanation from Boston-born Bahá’í Mountfort Mills about the evolution of the Faith, he came to a greater recognition of the legitimacy of Bahá’u’lláh’s claim to be the Successor intended by the Báb and he offered to translate more Bahá’í texts, but he died before having the opportunity to do so.

Professor Edward Granville Browne was the only westerner to meet Bahá’u’lláh in person. In the introduction to his translation of A Traveller’s Narrative (pp xxxvii – xli), Professor Browne wrote his recollection of his first encounter with Bahá’u’lláh. After stating that he could not describe the face upon which he gazed, he gives one of the best-written attempts to do so, and recounts the words that he recorded Bahá’u’lláh saying to him in that first encounter.

In Newcastle upon Tyne a small group of Bahá’ís gathered at his graveside on 14th October to offer a prayer for him and to read aloud those memories he penned to posterity of his first encounter with Bahá’u’lláh. In both Newcastle and Cambridge, on the night of 21st October, celebrations of the 200th anniversary of the birth of Bahá’u’lláh included portrayals of Professor Browne recalling those same memories.

A video of Newcastle’s graveside reading is shown below, as are the words read during it.

“One of Bahá’u’lláh’s younger sons entered the room where I was sitting and beckoned to me to follow him. I did so, and was conducted through passages and rooms at which I scarcely had time to glance to a spacious hall, paved, so far as I remember (for my mind was occupied with other thoughts) with a mosaic of marble. Before a curtain suspended from the wall of this great ante-chamber my conductor paused for a moment while I removed my shoes. Then, with a quick movement of the hand, he withdrew, and, as I passed, replaced the curtain; and I found myself in a large apartment, along the upper end of which ran a low divan, while on the side opposite to the door were placed two or three chairs.  Though I dimly suspected whither I was going and whom I was to behold (for no distinct intimation had been given to me), a second or two lapsed ere, with a throb of wonder and awe, I became definitely conscious that the room was not untenanted. In the corner where the divan met the wall sat a wondrous and venerable figure, crowned with a felt head-dress of the kind called táj by dervishes (but of unusual height and make), round the base of which was wound a small white turban. The face of him on whom I gazed I can never forget, though I cannot describe it. Those piercing eyes seemed to read one’s very soul; power and authority sat on that ample brow; while the deep lines on the forehead and face implied an age which the jet-black hair and beard flowing down in indistinguishable luxuriance almost to the waist seemed to belie. No need to ask in whose presence I stood, as I bowed myself before one who is the object of a devotion and love which kings might envy and emperors sigh for in vain! A mild dignified voice bade me be seated, and then continued:-

“”Praise be to God that thou hast attained!… Thou hast come to see a prisoner and an exile…. We desire but the good of the world and the happiness of the nations; yet they deem us a stirrer up of strife and sedition worthy of bondage and banishment…. That all nations should become one in faith and all men as brothers; that the bonds of affection and unity between the sons of men should be strengthened; that diversity of religion should cease, and differences of race be annulled – what harm is there in this?… Yet so it shall be; these fruitless strifes, these ruinous wars shall pass away, and the ‘Most Great Peace’ shall come…. Do not you in Europe need this also? Is not this that which Christ foretold?… Yet do we see your kings and rulers lavishing their treasures more freely on means for the destruction of the human race than on that which would conduce to the happiness of mankind…. These strifes and this bloodshed and discord must cease, and all men be as one kindred and one family…. Let not a man glory in this, that he loves his country; let him rather glory in this, that he loves his kind….”

“Such, so far as I can recall them, were the words which, besides many others, I heard from Bahá’u’lláh. Let those who read them consider well with themselves whether such doctrines merit death and bonds, and whether the world is more likely to gain or lose by their diffusion.”

That first interview with Bahá’u’lláh lasted about twenty minutes, during which Bahá’u’lláh read some of an epistle, the authoritative translation of which follows:

“The Purpose of the one true God, exalted be His glory, in revealing Himself unto men is to lay bare those gems that lie hidden within the mine of their true and inmost selves. That the divers communions of the earth, and the manifold systems of religious belief, should never be allowed to foster the feelings of animosity among men, is, in this Day, of the essence of the Faith of God and His Religion. These principles and laws, these firmly-established and mighty systems, have proceeded from one Source, and are the rays of one Light. That they differ one from another is to be attributed to the varying requirements of the ages in which they were promulgated…

“The utterance of God is a lamp, whose light is these words: Ye are the fruits of one tree, and the leaves of one branch. Deal ye one with another with the utmost love and harmony, with friendliness and fellowship. He Who is the Day Star of Truth beareth Me witness! So powerful is the light of unity that it can illuminate the whole earth.”

Shoghi Effendi. His Life in Pictures.

Images from the life of Shoghi Effendi, The Guardian of the Baha'i Faith, including a spoken recollection from "Hand of The Cause" Leroy Ioas. Photo…