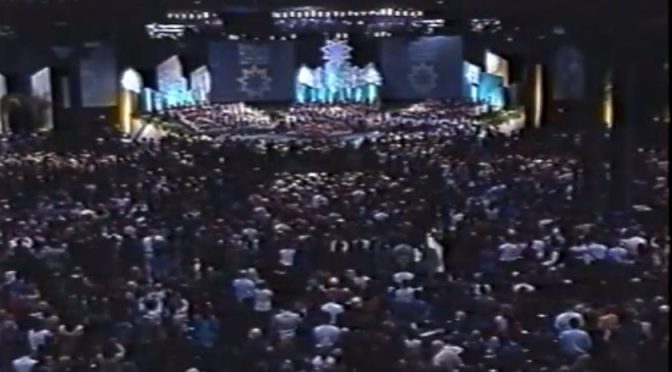 Exactly 25 years ago today, 30,000 Bahá’ís gathered in New York City for a four-day congress “to celebrate the centenary of the inauguration of the Covenant of Bahá’u’lláh and to proclaim its aims and unifying power.” I had a lesson in selflessness at this event which many of my friends have heard me relate at least once.

Before the World Congress formally got underway, Judge James Nelson, chairman of the National Spiritual Assembly of the Bahá’ís of the United States, read a letter to the world congress from American President George Bush, including the words:

“Bahá’í teachings on religious tolerance, the unity of mankind, the elimination of prejudice, equality of the sexes and universal peace, embody principles that all people of good will admire and support. As you salute the life and Writings of Bahá’u’lláh, I join with you in praying that we may see the realisation of these fundamental principles in every land.”

This was followed by the mayor of New York, David N. Dinkins, on behalf of the city, welcoming “the members of the Bahá’í Faith”, and joining “them in their wish for peace and unity among all the peoples of the earth.” The mayor then proclaimed “Monday, November 23rd, 1992, in the city of New York, as Bahá’í World Congress Day”.

I was quite impressed by this proclamation, until I realised, years later, that it was only November 23rd, 1992, that was being named Bahá’í World Congress Day, rather than November 23rd every year.

Each day of the Congress had a different theme:

The venue for the Congress was the Jacob Javits Centre, the main conference was split into two sessions, morning and afternoon, and Bahá’ís were either given yellow badges or blue badges to indicate whether they were to attend the morning or afternoon sessions. Each session having approximately 15,000 Bahá’ís attending from all over the world.

The spread and diversity of the Bahá’í community was celebrated with pride at the Congress and, especially in the 1990s when even tolerance between people of diverse backgrounds was still considered a challenge by many, the very clear sense of a collective love and unity among people from all over the world was probably the main feature of the congress.

There were also a series of subsidiary events held throughout the city each day including talks and performances showcasing talent from around the world.

I was lucky enough to be at the Bahá’í World Congress in person, in part because some Bahá’ís in Manchester had arranged a group deal with a holiday operator which made getting to – and staying in – New York City more affordable, but this congress wasn’t just for the 30,000 Bahá’ís who could make it to New York, it was for every Bahá’í in the world, so the Universal House of Justice arranged for something incredibly ambitious back in that time, they had the world congress broadcast live on satellite all around the world and Bahá’ís everywhere hired dishes and got together to watch the sessions. Conferences were also organised on every continent where the main sessions from the congress formed part of the programme. On the last day of the congress, during the morning session, two-way satellite links were made with each of these continental conferences, allowing those gathered in New York, and around the world, to see and hear them live.

An event of this size, with 15,000 delegates per session, relied on the assistance of many volunteers and there was a room that anybody attending could go to offer their assistance for tasks such as ushering. Volunteers could be seen throughout the venue, inside the main hall, in the large foyer hall, and outside the building.
Being a morning session person I had the pleasure of attending the opening session of the world congress and the live link-up with the conferences around the world. However, as the Bahá’í World Congress Choir finished their finale piece at the end of that final morning session, it was playing on my mind that the joy of being in the real closing session for the actual finale of the congress was a gift left for the afternoon session people, and discussing this with a couple of my friends at the event we realised that we could volunteer to usher in the main hall and in that way we might get to be there for the actual finish.

As we entered the volunteering room, it quickly became apparent that we were not the only people with this idea. There was a high demand for extra volunteers, but – it seemed – the need was not in the main hall where the prize of attending the closing session was to be found. Organisers would come in and ask for volunteers at the front of the building and hardly anybody would raise their hands, they seemed to be struggling for volunteers out front and in the foyer area but almost everybody sitting in the volunteering room was waiting for a chance to be of service in the main hall. My two friends and I sat there – for maybe 5 or 10 minutes – keeping our hands down while concerned looking organisers tried their best to rally support for other volunteering roles.

All three of us were quite active and dedicated Bahá’í youth at that time, and it soon dawned on each of us, at exactly the same time, that we were being selfish. I knew full well what it was like to be the organiser of – well, not an event of that scale, but relatively speaking – a large event, and yet I was sat there thinking about what I wanted rather than what the Bahá’ís needed. Suddenly feeling wiser about our former attitudes we agreed between ourselves that the very next moment that volunteers were sought for any role, however far away from the main session it may be, we would raise our hands. Albeit that the joy we had been seeking was watching Bahá’ís celebrating their unity, we had reminded ourselves that the far greater joy in this Faith is to be of service.

Shortly after this decision, volunteers were sought to usher at the front of the building and our hands shot up, I think we were – all three – glad that we had risen above our earlier hesitance, realising it had essentially been selfish, and just overcoming that selfishness felt rewarding in itself. With genuine smiles, we were happily led out of the volunteering room toward the front of the building to join the ushers dealing with the Bahá’ís outside the venue.

Bahá’ís have a tendency to gather in the most awkward places at events, they meet people whom they love dearly but haven’t seen in years and suddenly all thought of where they are standing escapes their mind, so ushering Bahá’ís standing outside the main venue was an important and necessary role. Except, my friends and I didn’t get to serve in that capacity. As we were led toward the main exit of the building another organiser came rushing up to the one who was leading us and asked “Are these volunteers? May I have them? I urgently need some more volunteers in the main hall!”. Having surrendered our own wishes and found ourselves very happy to serve in any capacity, we ended up being present for the whole of the actual closing session of that Bahá’í World Congress.

This was certainly a better close to the congress for me than it would have been if we had walked into that volunteering room and simply been offered that opportunity we were seeking to be in the last session.

The above video (which should start 1h49m in) is a parade of nations, celebrating the spread and diversity of the Bahá’í community, at the end of the first session on the first day of the Second Bahá’í World Congress.

The First Bahá’í World Congress was in London in 1963.