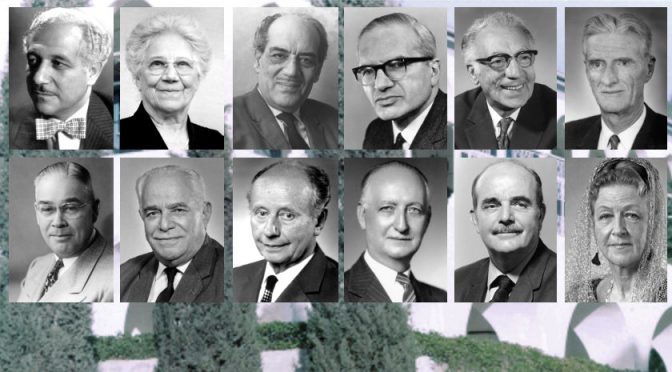 There was a six-year period in Bahá’í history where a dedicated group of individuals took on the role of looking after, guiding and protecting the worldwide community, between the passing of Shoghi Effendi and the election of the Universal House of Justice.

From the time of Bahá’u’lláh, until 2007, the Bahá’í community had a small number of extremely dedicated servants to whom the title “Hand of the Cause of God” was given.

Bahá’u’lláh appointed four Hands of the Cause, ‘Abdu’l-Bahá appointed a further four posthumously (after their deaths), and Shoghi Effendi appointed 42, including ten posthumous appointments.

‘Abdu’l-Bahá described the duties of the Hands of the Cause in these terms in His Will and Testament:

“The obligations of the Hands of the Cause of God are to diffuse the Divine Fragrances, to edify the souls of men, to promote learning, to improve the character of all men and to be, at all times and under all conditions, sanctified and detached from earthly things. They must manifest the fear of God by their conduct, their manners, their deeds and their words.”

In His Will and Testament, ‘Abdu’l-Bahá had also written the following instruction for the Hands of the Cause:

In a letter written by Shoghi Effendi to the Bahá’ís of the world in the weeks before his passing, the Guardian referred to the Hands of the Cause of God as the “Chief Stewards of Bahá’u’lláh’s embryonic World Commonwealth”.
Following the passing of Shoghi Effendi and careful checking that Shoghi Effendi had not somehow appointed a Guardian, the remaining Hands of the Cause gathered and followed the instructions of ‘Abdu’l-Bahá to elect nine persons who would be dedicated “Chief Stewards” for the Bahá’í community through to the establishment of the Universal House of Justice. These nine Hands of the Cause of God were called the Custodians.
In total, thirteen Hands of the Cause served as Custodians between November 1957 and the establishment of the Universal House of Justice in 1963. They were: Hasan Balyuzi, Amelia Collins, Abu’l-Qasim Faizi, John Ferraby, Ali Akbar Furutan, Paul Haney, Leroy Ioas, Jalal Khazeh, Adelbert Mühlschlegel, Charles Mason Remey, Horace Holley, William Sears, and Rúhíyyih Khánum.

These custodians worked dilligently to aid the Bahá’í world in fulfilling the goals of the Ten Year Crusade launched by Shoghi Effendi in 1953, which involved establishing new Bahá’í communities, building Bahá’í Houses of Worship and translating Bahá’í literature into many languages. They called the International Convention to elect the Universal House of Justice and, possibly being the most famous living Bahá’ís in the world at that stage, they declared themselves – one and all – ineligible for election to that supreme governing body.

One thought on “The Custodians”